Country Music Hall of Famer Loretta Lynn died October 4, 2022 at the age of 90. She’ll be remembered for her contributions to country music, and these vintage performances and music videos: I’m A Honky Tonk Girl, Don’t Come Home A-Drinkin’ (With Lovin’ on Your Mind), Fist City, Coal Miner’s Daughter, and Lay Me Down (with Willie Nelson). 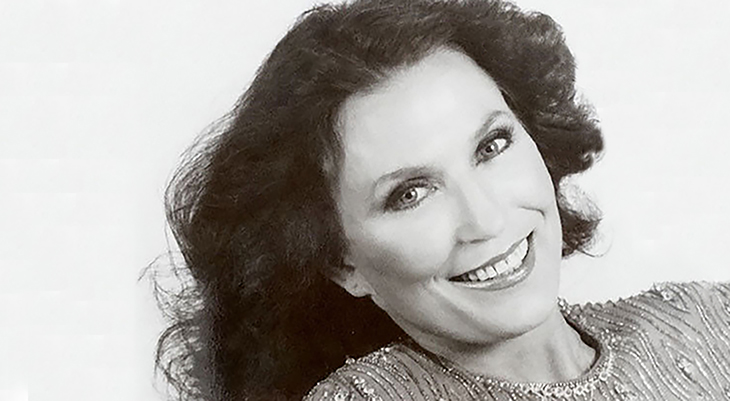 In her autobiographies Loretta Lynn: Coal Miner’s Daughter (1976) by Loretta Lynn and George Vecsey and Still Woman Enough (2002) by Loretta Lynn and Patsi Bale Cox, Lynn shared details from her childhood, marriage and career. Lynn has never given her exact birthdate, but said she had married when she was 13; in 2012, a birth certificate came to light that indicated her birth date was April 14, 1932, making her 2 years older than she claimed in her first autobiography.

As a child, Loretta sang hymns at church and in local Butcher Hollow concerts. She met 21-year-old Oliver Lynn (whom Loretta called Doolittle, Doo, or Mooney) when she was just 15 years old in December 1947; he bought the pie she’d baked and he walked her home. They married a month later in January 1948. 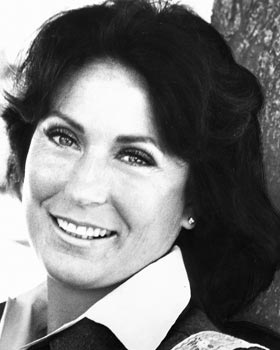 Loretta Lynn’s husband Doo bought her a guitar in 1953 and she taught herself to play. With her brother Jay Lee playing lead guitar, Lynn started her own band, Loretta and the Trailblazers; they performed in bars in Washington.

After seeing Loretta Lynn win a televised talent contest held in Tacoma, Washington hosted by country music star Buck Owens, Canadians Norm Burley and Don Grashey co-founded Zero Records based in Vancouver, British Columbia. Zero Records recorded 4 of Loretta Lynn’s songs in Hollywood, one of which was her debut single. I’m a Honky Tonk Girl (1960). I’m a Honky Tonk Girl made it to 14 on the Country Music charts. Loretta and her husband began touring to promote her songs.

Loretta Lynn met country music legend and fellow Decca Records recording artist Patsy Cline shortly after Cline’s devastating car accident in June 1961. Lynn has said Cline was her mentor and encouraged her to speak out and become more assertive personally (with her husband) and professionally; this came out in Lynn’s songwriting as well. Loretta Lynn and Patsy Cline were best friends until Cline’s 1963 death in an airplane crash. By then Lynn had joined Cline as a member of the Grand Ole Opry, in September 1962.

Doolittle and Loretta Lynn settled on a small ranch just outside Nashville, and their twin daughters Peggy Jean and Patsy Eileen Lynn were born in August 1964. Loretta Lynn became a grandmother for the first time at the young age of 34 in 1966, when her oldest daughter Betty Sue married and had a child.

In 1966 Loretta and her husband Mooney bought and moved to a 1200 acre plantation outside Hurricane Mills, Tennessee. Loretta Lynn continued to perform on the Grand Ole Opry, writing songs, recording and performing country music, and appearing regularly in the Top 10 Country Music charts.

Before the 1960’s ended, Lynn had acquired a new best friend in fellow country singer Tammy Wynette. They first met during Tammy Wynette’s brief marriage to second husband Don Chapel (m. 1967-1968), and remained friends until Tammy Wynette’s death in 1998 from a blood clot.

Loretta Lynn also had two more #1 Country Music chart hits under her belt – Fist City (1968) from the album of the same name, and Woman of the World (Leave My World Alone) (1969).

By the end of the 1970’s, Oliver “Doolittle” and Loretta Lynn had expanded their plantation home property, opened a dude ranch called the Double L, and bought the town of Hurricane Mills complete with post office.

Loretta Lynn’s hit singles began to decline in the 1980’s, although she did have a #1 Country Music chart hit – I Lie (1982) from the I Lie album, the year she turned 50. She turned her hand to acting in a 1982 episode of Fantasy Island, co-starring with regular Ricardo Montalban and fellow guest stars Heather Locklear, Anne Jeffreys, Ted McGinley, and Nita Talbot.

From 1984-1988, Loretta Lynn, now in her 50+ years, was a Crisco spokeswoman in commercials. Lynn appeared in television and print commercials, sometimes with husband Mooney and their twin daughters. 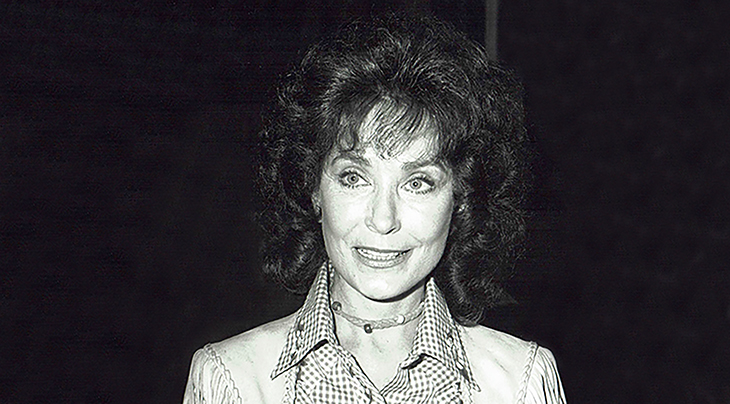 During the late 1980’s/early 1990’s, Lynn’s husband Doolittle Lynn was having problems with his feet, then started having heart trouble. Loretta cut back on her touring and recording schedule in order to spend time more time with him. Mooney Lynn had quadruple bypass heart surgery in 1992, which was followed by complications from diabetes. Their plans to build an entertainment complex in Branson, Missouri in 1993 were scrapped, although Lynn’s music video with friends Dolly Parton and Tammy Wynette, Silver Threads and Golden Needles (1993) was released that year.

Oliver (Doolittle) Lynn died from congestive heart failure in August 1996, just a few months before Loretta Lynn became a senior citizen. Loretta and he had been married for over 48 years.

By the end of 2004, septuagenarian senior citizen Loretta Lynn had moved to a smaller house on the ranch property that had been built before her husband’s death, and her second autobiography had been published.

Singer and musician Jack White of the White Stripes rock band was a fan of Lynn’s, and had recorded a cover of her song Rated X. When she heard it, Loretta invited White and his wife Meg (then masquerading as his sister) out to the ranch. A friendship was struck and Jack White ended up producing Loretta Lynn’s new album Van Lear Rose (2004). Jack White performed on all the album’s songs as a musician, co-wrote the song Little Red Shoes with Lynn, and they sang a duet on the single Portland, Oregon (2004). The Van Lear Rose album won the Grammy Award for Best Country Album of the Year.

In June 2006, Loretta Lynn broke her shoulder in a fall at her home in Tennessee; falls for seniors are serious, and this proved to be the case with Lynn. She almost died on the operating table during the subsequent shoulder replacement surgery, and had to be revived by doctors before they were able to successfully complete the procedure.

Loretta Lynn was given the Grammy Lifetime Achievement Award in 2010, recognizing her milestone of 50 years in country music.

Octogenarian senior citizen Loretta Lynn was presented with the Presidential Medal of Freedom in November 2013 by President Barack Obama. She’s a grandmother to over 20 grandchildren, and a great-grandmother as well.

In 2016 her duet with Willie Nelson Lay Me Down (2016) was released as a music video, and if you want to see her in concert, in addition to some performances at her Hurricane Mills, Tennessee ranch complex, she has a few tour dates this spring/summer in the United States. Below, the music video for Loretta Lynn and Willie Nelson’s duet, Lay Me Down:

Note: This article was first published in 2016 as Celebrating Seniors – Loretta Lynn is 84. It has been updated with current information.

I'm very thankful I grew up listening to you my mother that I love dearly past n 1976 buried there a little place called Allen Kentucky n was born in Butcher Holler, Kentucky. I heard stories of my mother n Lorretta there where happy ones but most of all very sad ones. I only wanted to say thank you for your music n the memories that my mother said to me many years ago. I turned 55 on April 16th it is like decades has past us by but it still feel like a few weeks ago. I remember when I was young my mother would put us on a blanket or towel my sister's & I would take turn buffing the wood floors listening to Loretta n Johnnie CASH, Freddie Fender. God Bless you Loretta Lynn n your family.

Thank you for this write and music on a lady so worthy of notice for her life-long achievements - and take note that she never lip sang - every note was HERS. And her voice is still strong today (2017).

I took a long video trip to her birth home, and unless you do that, you cannot fully appreciate all what Loretta has been through and lived through and how well she really did in her life. No one today could survive what she has from her beginnings. They made them strong back then, and I'm almost from that era also. She's 12 years old then I am.

I cannot believe how fast the years have sailed by. To me the 50-60's were like yesterday.
I swear, all I did is blink...........and those years were just gone. I remember every day of them and I remember every new song Loretta came out with as I sang her songs in my own band, but time is a very funny thing.........when you hit your late 60's early 70's, you still feel like you can still touch those days - they seem like they are not that far from you as you age. A decade is more like a week as you age - that is how fast time literally flies by.
And Loretta - she really has not changed at all ! She looks the same, sounds the same, and is the same sweet gal she always has been.
God bless her !

You say she was actually born in 1932 and then that she was 20 in 1960?? Check your math there. She was actually older than Patsy Cline by 5 months and and all that stuff about her being the "youngest star" was BS.