The songs & story behind 8 of the best from Dr. Hook & Dennis Locorriere: Sylvia’s Mother, The Cover of Rolling Stone, Only Sixteen, A Little Bit More, Sharing the Night Together, Sexy Eyes, and When You’re In Love With a Beautiful Woman. 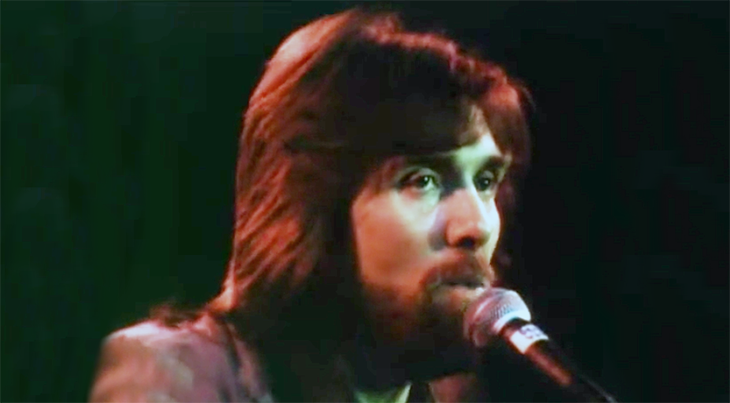 According to a 1973 interview with Lakeland’s The Ledger newspaper, Mary Ann and Dennis Locorriere got married just 6 months after their first meeting. Son Jessejames Locorriere was born in January, 1971, and is now an actor of TV & films (he recently had roles on Ozark and Nashville). Jessejames (who looks a lot like his dad) is also a father himself, making Dennis Locorriere a grandfather. 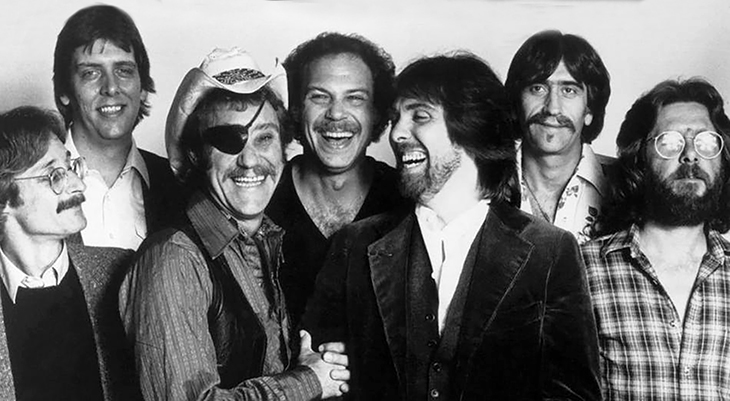 Dr. Hook & The Medicine Show (shortened to Dr. Hook in 1975) had their first hit single with Sylvia’s Mother (1972), written by songwriter, poet, and cartoonist Shel Silverstein. Sylvia’s Mother made it to #5 on the US charts and was included on their debut album Doctor Hook (1971), on which Locorriere sang lead vocals, and played guitar, bass guitar and harmonica.

Below, Dennis Locorriere singing Sylvia’s Mother in a live performance with Dr. Hook, in the 1970’s. Note the long full beard on Locorriere!

The following year, Dr. Hook’s second hit single The Cover of Rolling Stone (1972), written by Shel Silverstein and included on their second album Sloppy Seconds (1972), came close to the success of Sylvia’s Mother, reaching #6 in the US.

According to author Gavin Edwards (Is Tiny Dancer Really Elton’s Little John?: Music’s Most Enduring Mysteries, Myths, and Rumors Revealed), Dr. Hook guitarist Rik Elswit said the band had been struggling to find a follow-up hit to Sylvia’s Mother, and as the song lyrics go,

“We keep gettin’ richer but we can’t get our picture on the cover of the Rolling Stone.”

Elswit said songwriter Shel Silverstein had asked the band if they wanted to be on a Rolling Stone cover (duh), and then played the song for them. Elswit recalled the song was quickly recorded within a few hours:

“The dope being excellent, we were in no shape to really evaluate the song. So after we picked ourselves up off the floor and stifled most of the laughing, we went right about recording it.”

The next year, a caricature of Dr. Hooks’ Ray Sawyer, Dennis Locorriere, and another bandmember in the background, did indeed appear on the cover of Rolling Stone magazine (March, 1973).

Riding high on the wave of early successes and not managing their money, Dr. Hook & The Medicine Show went bankrupt. The band regrouped, Dennis Locorriere cut his hair, and they recorded the new Dr. Hook album Bankrupt (1975).

Record stations were more receptive to the new look of Dr. Hook. Their cover of the Sam Cooke song Only Sixteen (1975) written by Sam Cooke, Lou Adler  & Herb Albert, became another Top 6 hit single for them, and was the most successful version to chart. Below, Dr. Hook with Dennis Locorriere singing the lead on Only Sixteen (1975), in 1976.

The hit single A Little Bit More (1976) written by Bobby Gosh, and included on the Dr. Hook album of the same name, made it to #11 in the US and #2 in the UK. Below, Dennis LoCorriere performs A Little Bit More live.

Dr. Hook’s Top 12 hit single Better Love Next Time (1979) from the album Sometimes You Win, was eclipsed the following year by another single from the same album, the disco-tinged Sexy Eyes (1980).

Lead singer Dennis Locorriere’s female fans might think the band’s hit song Sexy Eyes was written about himself, but in fact Sexy Eyes was written by Chris Waters, Keith Stegall, & Bob Mather. Although other artists have covered Sexy Eyes, Dr. Hook’s version became one of their biggest hits, a #5 smash in the US and # in the UK.

In 1985 Dr. Hook broke up and Dennis Locorriere moved to Nashville with his son Jessejames to be near the music scene. 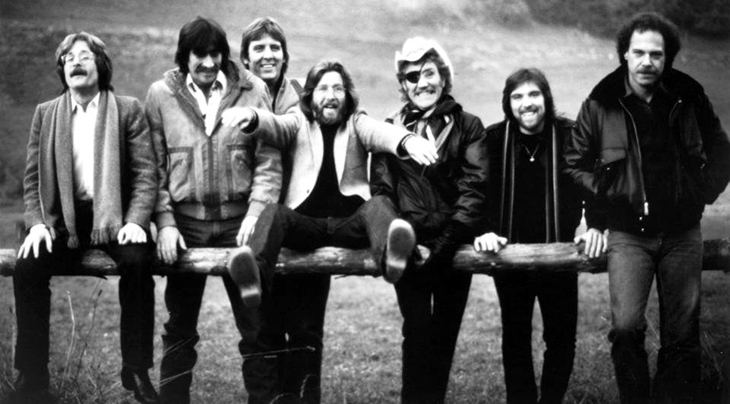 In the years since the “original” Dr. Hook parted ways, Dennis Locorriere has sung backup and toured with other artists, such as Randy Travis. He dabbled with acting and appeared in the short play The Devil and Billy Markham (1989), written by Dr. Hook’s sometime songwriter and Locorriere’s long-time friend, Shel Silverstein.

As a songwriter, Dennis Locorriere’s songs have been recorded by singers such as Bob Dylan and Crystal Gale. The song Couple More Years written by Dennis Locorriere and Shel Silverstein, was recorded as a duet by Jerry Lee Lewis and Willie Nelson for Lewis’ Last Man Standing (2006) album.

Dennis Locorriere divorced in the mid-1990’s and remarried (Susan), then divorced again in 2004. In his 50+ years he moved to Sussex, England when his first solo album Out of the Dark (2000) was released.

He owns the rights to the name Dr. Hook and has toured periodically with groups under that name, as well as touring with Bill Wyman’s Rhythm Kings as a member of the band. Dennis LoCorriere’s most recent solo album is Post Cool (2010).

In 2015 Locorriere began DR HOOK™ – The Timeless World Tour that has included Australia, New Zealand, the United Kingdom and Europe…his tour dates for the Dr. Hook 50th Anniversary Tour extend into 2020. Catch the latest Dr. Hook news on his website, DennisLocorriere.com. Unfortunately his North American fans may have a wait to see Dennis Locorriere and his sexy eyes in concert, unless they travel overseas.

Note: This article was originally published in 2016 under the title Celebrating Seniors – Dennis Locorriere is 67. It has been updated with additional & new content.

Aww gotta love dr hook denis has a fantastic voice, and yes very sexy eyes wish id been to one of his concerts. From England.

Love this band and Dennis such a good looking man even now. Would love to see him. On my bucket list for sure! In Bismarck, ND. List to them in my car everyday and when I go to bed every night!

I grew up listening to Dr Hook. I think I knew Sylvia's Mother before she did. I was probably 6 years old then and I am still listening to their music today at 52. I have Dr Hooks Greatest Hits CD in my SUV and some of the passengers, the young ones of course, say " Who is this? ". I tell them Dr Hook and the laugh. Kids now a days don't know good music. Also Dennis singing Sharing the Night Together wasn't bad looking at either. Loved his feathered hair, when that was the style then but his Sexy Eyes were great too

I was a teen when I first saw the Dr. Hook Medicine Show. I loved their party free spirits watching their charisma, friendship like know other. I’m sure they deeply cared for each other.... they should be in the RRHOF ☮️❤️Bless Their Hearts❤️❤️❤️

Oh, I forgot, So sorry about Ray Sawyer’s passing I never met him but he sure looks like a fun guy And a great friend to Dennis I hope And I read it was not a bad break up they just separated.

I remember being a great fan in the 70s of the group and I just rediscovered them recently by surfing YouTube and finding Sylvia‘s mother and each time I watched it I cried and cried possibly from being older and possibly from having doctors but I can get through it now. So thanks Dr. Hook you are a big part of my life now.

He is about 5ft 7in playing this weekend in Copenhagen
Capital of Denmark Next time I see him I will ask about when playing in USA absoluteanywhere.com

He’s still sexy at 70 and I’m 13 years younger than him! Such a great singer!

Thanks for sharing! Sounds like you have/had a close connection with Dr. Hook. What's your relationship to the band?

It has always amazed me how wrong so much of the info by journalists and fans of Hook have been about the history of the band and what actually were the real facts... Not that it matters much after all these yrs.. They also mostly get it wrong about Shel Silverstein and his relationship with the band which was pretty much distant through their career... Shel would always play his songs for me to decide which I wanted to record with the band.... The story Rik told about The Cover Of Rolling Stone is completely false..I probably know most about it in that Shel was my close friend for yrs before I found Dr Hook..All this is the reason I don’t much trust history of any kind.. It’s mostly like the telephone game..

Thanks for sharing! Sounds like you have/had a close connection with Dr. Hook. What's your relationship to the band?

Happy Birthday Dennis!!!
Wherever you are and whatever you’re doing, Have Fun!
69! Yeah Baby! Rocking On!!!
You still melt my butter!
😍

I wish Dennis would come back the United States (Virginia), l love his voice and would love to go see him in concert. Come back. :)

I wish so much Dennis would come back to USA, need to find out more why he is not home singing to all of us Americans who love him and have loved him since his early days, PLEASE Dennis !!!!

Great article! Learned a lot about Dennis that I never knew.
Why won’t he come to USA ? That is really sad for us and makes me wonder if there is a reason he won’t come here.

I’d like to know #1. Why won’t Dennis come back to sing in the US, more specifically TEXAS? #2. How tall is Dennis? And the song “Sexy Eyes” should have been written for HIM!! He’s got beautiful sexy eyes!!!