Sometimes a vacation isn’t always a vacation. Like the time I went to Kenya to help out some giraffes…and was almost killed by a charging Cape buffalo.
I didn’t tell my family that part of my story until I returned. 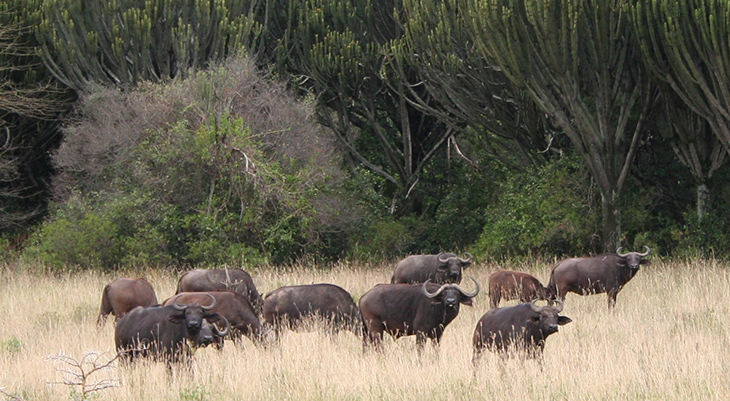 (Cape Buffalo Herd, Soysambu Conservancy – Kenya, Africa*)
It all started when, in 2016, I was looking for a more meaningful travel experience. I love exploring–learning about different cultures, meeting new people, seeing new things. I had been looking for a way to ‘give back’ and, perhaps, for a more ‘immersive’ experience but I was wary of exploitative ‘voluntourism’.
While volunteering at the Toronto Zoo I heard about the Canadian organization Animal Experience International. Their focus is on animal conservation and matching potential volunteers with ethical opportunities.  Looking at their website was promising–I spent time speaking with the two co-founders, Heather and Nora, and signed on! 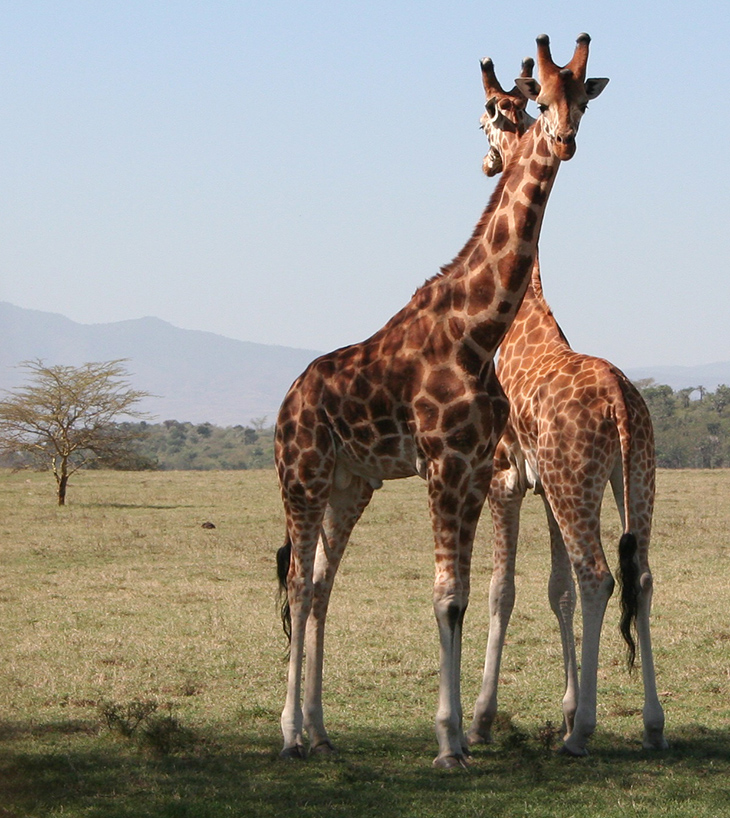 (Rothschild’s Giraffes on Soysambu Conservancy, Kenya**)
The specific experience I selected that first time was an opportunity to assist with a giraffe research project on the Soysambu Conservancy in Kenya.
We were a small group–four women, including Nora from AEI. We would be monitoring and recording the movements and behaviour of the wild giraffes living within the Conservancy boundaries.
When not doing this, we would also assist in other activities such as clearing out poaching snares as well as identifying and counting shorebirds. Bring it on!
Needless to say, it was an exhilarating and rewarding experience. Traveling out every day, with two armed guards, looking for and identifying the various giraffes was amazing. 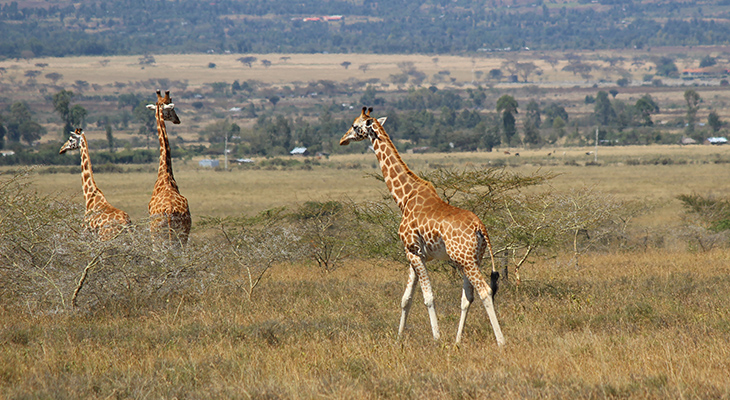 (Juvenile Rothschild’s Giraffes, Soysambu Conservancy, Kenya***)
Every one is different, recognizable by unique patterns (think of our fingerprints).
As we found them we’d determine, using the database of already-identified animals, who it was we were seeing, other individuals they’re with, what they were doing, where, etc. 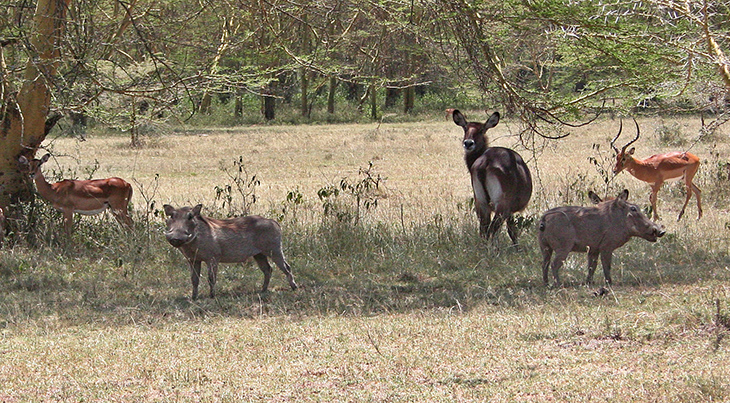 (Warthogs, Gazelle & Waterbuck on Soysambu Conservancy, Kenya)
One afternoon we had the task of clearing some brush from the trail going to a ‘hide’. Similar to ‘blinds’ here, these small huts are dotted in various areas of the countryside and used by researchers to unobtrusively observe species. 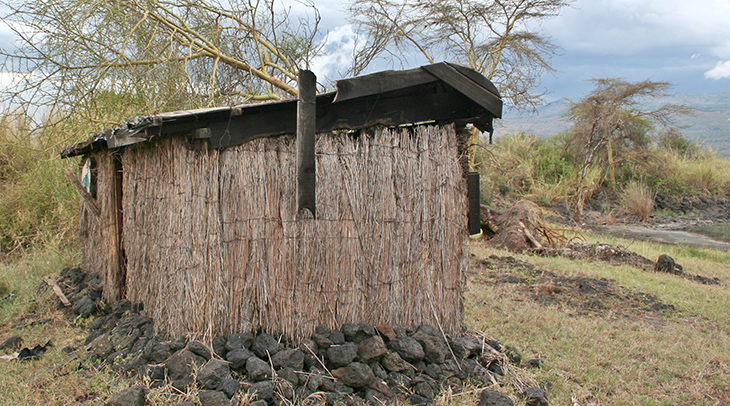 (Hide on Soysambu Conservancy, Kenya)
In the temperate climate of Kenya, any trail not used on a regular and frequent basis gets quickly overgrown. Using heavy machetes for cutting and pulaskis for digging (sore muscles the next day!) we started work on one such trail.
For safety reasons, protocol demanded that one guard worked in front of us while one worked in back. The guard at the back was also responsible for gradually moving the vehicle up along with us as we made our way through, to ensure we were never far from it. I soon learned the wisdom of this.
I was in the middle of the line with one guard and two volunteers in front of me, while the other volunteer and guard were behind me. Suddenly, (and most of this recollection is now in hindsight) I heard a yell in front of me. I looked up and the two volunteers were running toward me wild-eyed and both yelling–I think–to RUN! Behind them, seemingly just a few feet away, was a charging Cape buffalo, coming straight down the path. 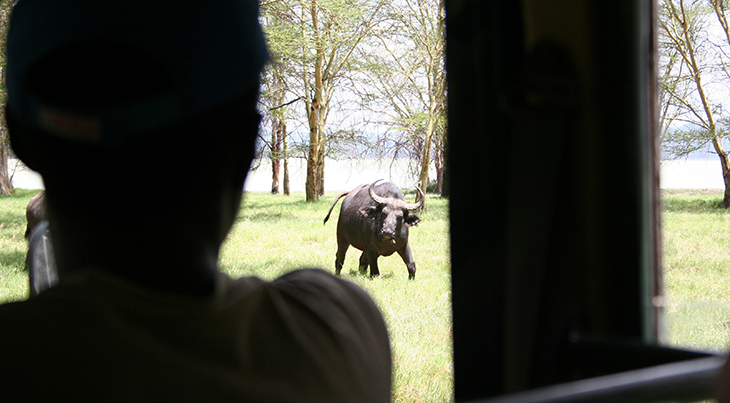 (Cape Buffalo, Soysambu Conservancy, Kenya)
In idle moments…perhaps while watching a dramatic scene in a movie…I have wondered what I would do in a truly life-and-death situation. Would I freeze? Would I keep my wits about me?
I turned and ran like hell. The truck was close but it felt as if I ran the length of a football field. Time seemed to slow down. I could see the truck but it was if it wasn’t getting any closer. Then, I was there. At some point I had flung away the machete (I cringe now, thinking about that) but still had on my large leather work gloves. I seemed to fumble for agonizing minutes, trying to get my fingers around the handle to yank open the front door. I remember thinking–just for an instant–that I may have to scramble through the open window. Thank goodness I didn’t have to put THAT to the test!
The guard at the back had made it up and into the driver’s seat. When I flung the door open I remember seeing my camera on the seat…no time to reach in and even fling it to the floor–and then I looked behind me. By this time the other two women who had been following me were no longer there. Two had made it to the back of the truck and climbed in while I think the fourth had circled to the other side. There was no sign of the second guard but I wasn’t thinking that at the time…I was looking at a running Cape buffalo, mere feet away, coming straight at me. I looked away and jumped up into the cab directly on top of my camera, slamming the door behind me as I went.
The animal continued on its trajectory, right at my door. Slamming into it and rocking the vehicle sideways. When that didn’t seem to give it satisfaction, the buffalo started looking for other ways to attack this thing. Meanwhile, there were screams. The volunteer who had gone around the other side of the vehicle wasn’t actually IN the vehicle. One of the women in the back got back out and helped the last volunteer to finally scramble in. 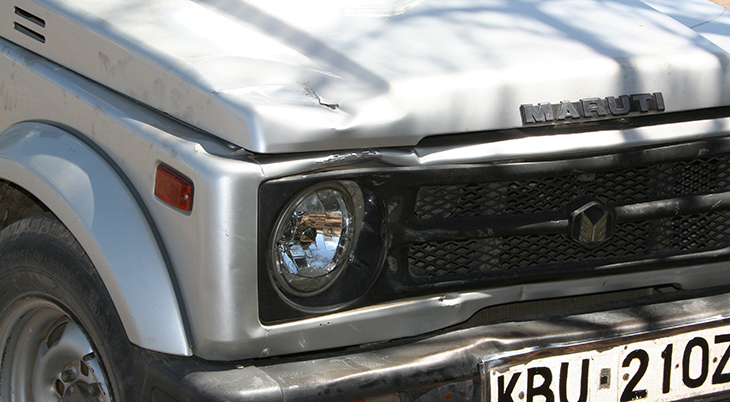 (Soysambu Conservancy Truck Damage From Cape Buffalo Attack)
For several minutes–or, what seemed like hours–the animal attacked the front and side of the truck. In hindsight, our screaming probably heightened the animal’s blood lust. Finally, it tired of the fight and disappeared back into the jungle. We sat, frozen in fear. Crying. Panting. Sweating. Afraid.
What had happened to the guard at the front? The one who must have been the first in the buffalo’s path? As we sat, listening for the possible return of the animal, the guard appeared before us. For a second, there was stunned silence. Then, joy!
He had, indeed, been the first to see the Cape buffalo step out of the jungle and onto the path. Too close to it for a get-away run and no useful trees close enough to climb, he did the next best–unbelievable–thing. He flung himself, full body, into a massive bush of cactus. We thought the worse but never guessed this! His wounds were minor, especially considering the alternative. 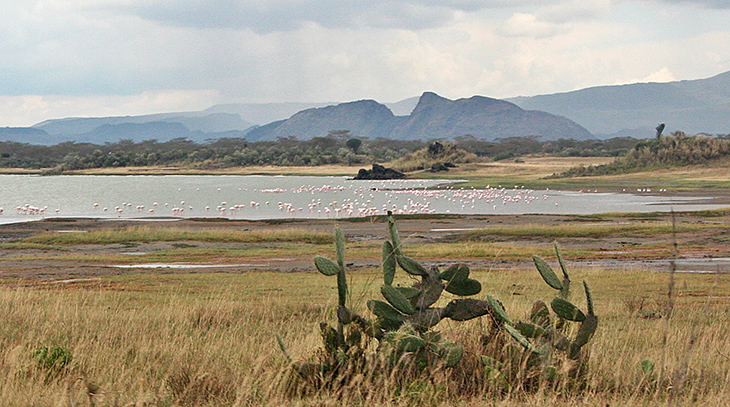 (Cactus & flamingos, with “Sleeping Warrior”  behind Lake Elmentaita, Kenya****)
Luckily, the truck didnt’ have any damage that prevented us from driving it back to the research station afterward. When we made our way back to the Conservancy headquarters, the incident had to be reported to the Kenya Wildlife Service.
We learned later that KWS had located the animal and put it down. Sad but necessary in the circumstances. Cape buffalo are not solitary creatures and to see one on its own like we did was not a good sign. The guard who had made it to the truck had had the presence of mind to note the buffalo, a female, seemed to be limping.  Although it would have been eventually predated by a lion or leopard (who only attempt it if the buffalo is injured or very young), until this could happen a rogue animal is very dangerous…to the children who walk the trails to school, farmers with their herds of cattle, and others.
My camera survived. 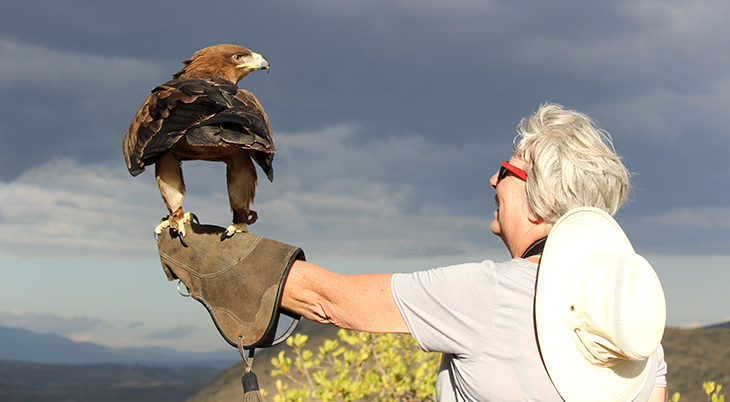 (With Tawny Eagle “Boo”, Soysambu Conservancy Raptor Centre, Kenya)
If you are interested in learning more about ethical volunteering in support of animal conservation I recommend you check out www.animalexperienceinternational.com

*Both male and female Cape Buffalo have horns. They are considered the most dangerous animal on the land–even more so than lions etc–because of their size (1100-2000 lbs), aggressiveness, and unpredictability. They didn’t hesitate to sometimes exhibit aggressive behaviour towards moving vehicles, sometimes even chasing them.
**The focus of our study. There are just under 100 of these Rothschild’s giraffes on the Conservancy, which equates to about 10% of those left in the wild.
***While monitoring, we came upon some juvenile giraffes–new that year–who were not yet in the database and we were given the privilege of naming and cataloging them. Here is J047 Liam! Yes, I named this youngster after my oldest grandson. I may need to return…I have more grandchildren.
****The legend is that it’s an ancient sleeping Masai warrior.
www.OneDayisHere.com
*Unless noted otherwise, all photographs on this page are © 2018 Marilyn McGrath. All rights reserved. Do not download or reproduce without written permission.*