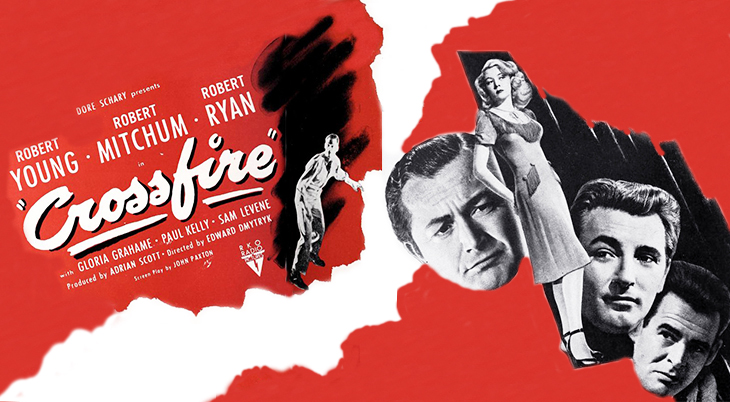 Director Edward Dmytryk’s film-noir drama Crossfire premiered on July 22, 1947 in New York City. Based on Richard Brooks’ novel The Brick Foxhole (1945) about a homosexual who is victimized by bigots, the screenplay of Crossfire has anti-Semitism and racism as it’s core themes instead. This change was made by screenwriter John Paxton, to accommodate the restrictive rules of the moralistic Hays Code. Under the Hays Code (which was introduced in 1930 and was enforced between 1934 and the late 1950s), mentioning or portraying any sexual perversion was banned (homosexuality was considered to fall into that category). 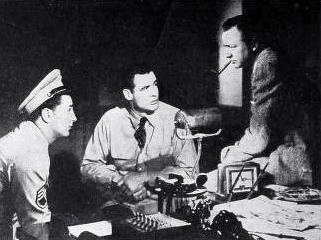 Filmed at the RKO Studios in Hollywood and at the RKO Encino Ranch earlier in 1947, Crossfire is set in post-WWII Washington, D.C. The film’s plot has two policemen – Sergeant Keely (Robert Mitchum), and Detective Finlay (Robert Young) – investigating the murder of Joseph Samuels (Sam Levene), a Jewish man who was beaten to death in his apartment.

They discover that Samuels had met 3 soldiers earlier that night at a bar – Montgomery/Monty, Mitchell, and Floyd. 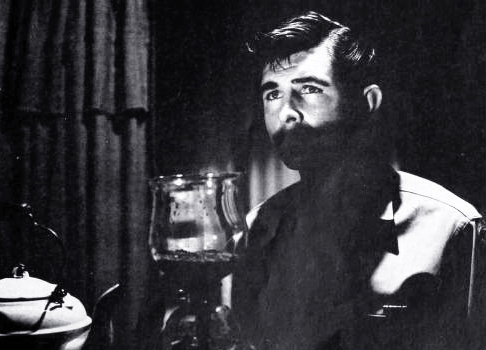 As they question the three soldiers, the story is told through their eyes as flashbacks. Arthur Mitchell (actor George Cooper in his film debut) is nervous, Monty (Robert Ryan) is an abusive, racist bully, and Floyd Bowers (Steve Brodie) is a weak coward. When the men go back to Samuels‘ apartment, Samuels ends up beaten to death.

Friendly hostess Ginny Tremaine (Gloria Grahame) had given Mitchell (who is a friend of Keely‘s) the key to her apartment, and he goes there to hide. A trap is laid to catch the killer and the suspense builds nicely. 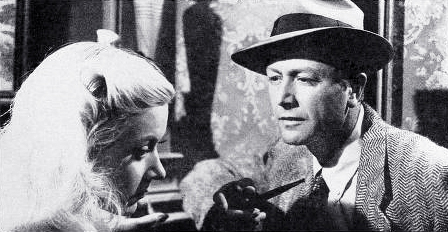 Escape Radio Drama Debut: The Man Who Would Be King

The Man Who Would Be King episode was subsequently aired again on Escape starring different actors. This episode of The Man Who Could Be King features the voice-acting of Ben Wright, Wilms Herbert, John Dehner, Peggy Webber, and Jack Kruschen.

Three other episodes of Escape aired in July 1947:

Escape was a popular radio series and stayed on the air until September 25, 1954 – in all, 230 episodes aired during it’s 7 year run. It’s dramatic introduction set the tone for the stories that followed:

“Tired of the everyday grind? Ever dream of a life of romantic adventure? Want to get away from it all? We offer you…Escape!“

Announcers on Escape included Paul Frees (“Man of a Thousand Voices“), who also starred in 15 episodes of the series. 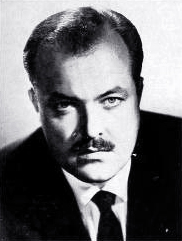 For a few months in 1950, a short-lived parallel television series of Escape was aired, while the radio series played on.

Inspired by a popular Broadway play, songwriters Alfred Bryan (lyrics) and Fred Fisher (music) wrote the song Peg O’ My Heart in 1913. It’s been covered by countless artists in the years since then.

There was a traffic jam when five different artists competed with their versions of the hit song Peg O’ My Heart on the Billboard Charts in July 1952 – The Harmonicats, The Three Suns, Clark Dennis, Art Lund, and Buddy Clark.

The winner of this particular race was The Harmonicats, with their music-only version of Peg O’ My Heart. It was released in March and spent 21 weeks on the Billboard charts in 1947, peaking at #1, and ending the year ranked #2 on the Billboard Year-End Top Singles of 1947.

The Three Suns also released a music-only version of Peg O’ My Heart; theirs spent 16 weeks on the charts in 1947, peaking at #2.

Buddy Clark sang Peg O’ My Heart, accompanied by an orchestra led by Mitchell Ayres. Clark’s song debuted on Billboard at the end of June and spent 7 weeks on the chart, peaking at #4.

Art Lund and Clark Dennis both sang the lyrics to Peg O’ My Heart accompanied by orchestras; Lund peaked at #6 during 10 weeks on the chart, while Dennis spent 1 week at the #10 spot.

The title had previously been a hit at the movie theatres, with no less than three films called Peg O’ My Heart: