The story of Abdul “Duke” Fakir, the Four Tops, and vintage music videos of their biggest hits: Baby, I Need Your Loving; I Can’t Help Myself (Sugar Pie Honey Bunch); It’s the Same Old Song; Reach Out (I’ll Be There), Standing in the Shadows of Love, Ain’t No Woman (Like the One I’ve Got), When She Was My Girl. 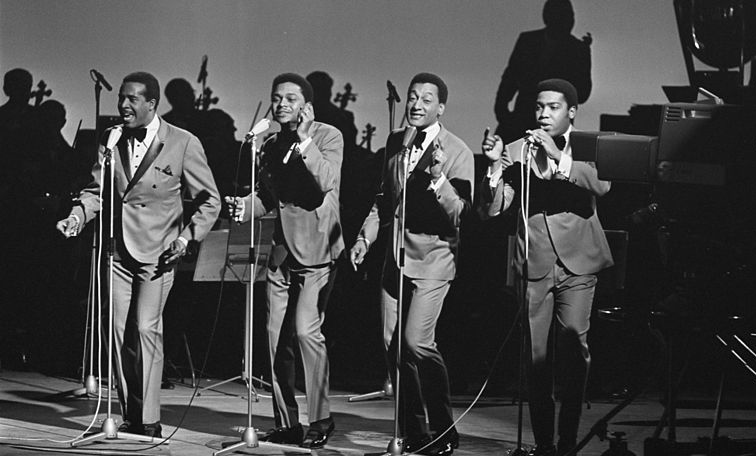 Born and raised in Detroit, Michigan by parents of Ethiopian and Bangladeshi heritage, Duke Fakir has lived his entire live in the Detroit area. He told freelance writer Malcolm Wyatt in April 2016 that due to their large families in Detroit, the Four Tops opted to stay in Detroit instead of moving to Los Angeles in 1972 when their Motown label moved there.

Duke Fakir has said he grew up singing jazz and gospel music in church and choirs in Detroit. While attending Detroit’s Pershing High School, he met baritone singer Levi Stubbs (a cousin of singer Jackie Wilson). As Fakir tells it, “When I met Levi and we first started singing together, way back before we started The Four Tops, I just knew he had an incredible voice. He was destined to be lead singer, whether it was going to be all by himself or whatever. Levi actually moved in with me. I was an athlete and I played on the basketball and football teams, and Levi would ride the bus with me going to the game with these team players.”

By the time Levi Stubbs and Duke Fakir met Northern High School students and singers Lawrence Payton and Renaldo “Obie” Benson at a party in 1954, they were already aware of each other’s talent, due to being in competing groups. Once at the party, Fakir and Stubbs were asked to sing, and Payton and Benson joined in. As Duke Fakir tells it, ““We told Levi to just pick a song and sing the lead. We’d just back him up. Well, when he started, we all fell in like we’d been rehearsing the song for months! Our blend was incredible. We were just looking at each other as we were singing, and right after we said, ‘Man, this is a group! This is a group!” The next day we started rehearsing and became The Four Aims.”

Duke Fakir told The Quietus that both he and Obie Benson had received scholarships to go to the same college, but their first professional singing gig that summer changed their career path. The Four Aims became popular local recording and performing artists. In 1956 they signed with Chess Records and changed their name to the Four Tops. For the next ten years the Four Tops toured across the United States, playing clubs in New York and Las Vegas, and honing their R&B and soul music sound.

Success began to come their way after the Four Tops signed with Motown records and Berry Gordy in 1963. After initially singing back-up for The Supremes and Martha and the Vandellas, the Motown songwriting team of Holland-Dozier-Holland (Lamont Dozier, Brian Holland, Eddie Holland) began writing songs for the Four Tops.

At Berry Gordy’s insistence, It’s the Same Old Song (1965) was written and produced by Holland–Dozier–Holland, recorded by the Four Tops, and released – all within 24 hours. Gordy wanted to counter a re-release of the Four Tops single Ain’t That Love by the group’s previous label, Columbia Records. Baby boomers loved it and It’s the Same Old Song made it to #5 in the US, and #2 on the R&B charts.

Bernadette (1967) was recorded in the Hitsville U.S.A. Studio A and released in February 1967. Written by Holland-Dozier-Holland, Bernadette was their last Top Ten US hit of the 1960’s, making it to #4 US and #3 R&B. When Bernadette was re-released in 1972, it made it to #23 in the UK. It would be the last big hit single for the Four Tops written by Holland-Dozier-Holland, as the songwriting team left Motown in 1967 due to royalty and other disputes.

For a while Duke Fakir was linked in a romantic relationship with Mary Wilson of the Supremes; keeping it in the Four Tops family, Obie Benson was linked with The Supreme’s Florence Ballard. At Florence Ballard’s 1976 funeral, the Four Tops – Duke Fakir, Obie Benson, Levi Stubbs and Lawrence Payton – were among her pallbearers. Mary Wilson and Duke Fakir have remained friends and sang Christmas songs together in 2013 in the Mary Wilson Holiday Spectacular stage show.

The Four Tops continued recording, touring, and performing together during the 1960’s and 1970’s. They have continued to tour frequently in the 80’s and beyond, and have always been very popular in the UK.

The Four Tops performed the song Back to School again with the cast of Grease 2, which was included in the movie’s soundtrack.

A 50+ Duke Fakir and the rest of the Four Tops had a narrow escape in 1988 when they missed their pre-Christmas Pan Am Flight 103 to return to the U.S. from the U.K. They were delayed in the U.K. in order to complete filming Top of the Pops; fortunate for them, as the plane they were meant to be on carried a terrorist bomb and crashed in Lockerbie, Scotland.

The Four Tops were inducted into the Rock and Roll Hall of Fame in 1990, and the original 4 members of the Four Tops continued performing together until Lawrence Payton’s death from liver cancer in June 1997, approaching 44 years as an unchanged group. The 3 remaining members – Abdul “Duke” Fakir, Renaldo ‘Obie’ Benson, and Levi Stubbs – performed for a while as a trio under the name The Tops. Eventually singer Theo Peoples, who had sung backup with the group before and had been with The Temptations, joined as the new 4th member of the Four Tops.

Septuagenarian Abdul “Duke” Fakir told The Quietus in 2010 that retirement wasn’t on his radar yet, saying:

“I was born to do this. At my age you would think travelling as much as I do would drive me up the wall, but no! I’m always anticipating where I’m going, what I’m doing next. I get on the plane and I say ‘phew!’ because the phone doesn’t ring, and I can read a book, watch a movie, I can just take a nap. And when I get where I’m going, that becomes the best part of my day because I’m about to do the thing that I love the most. It can be the smallest city in the states or it could be the largest venue in the world – I’m still excited and I anticipate that evening. It’s great to still have passion for what I do. I think that that’s a blessing. The moment I do not have passion, or the moment that people start looking at us and saying ‘you’ve been here a few times, we’re a little bit tired, why don’t you go home and sit on the couch’, if I start feeling that I’d had enough I would, but I haven’t.”

Octogenarian senior Duke Fakir told Express in September 2016 “I have a lovely home where my wife and I live and I’ve been married for 42 years. I have four children from my two marriages and they are all wonderful. I feel totally blessed.” He travels to Minnesota and Atlanta to see his grown children, grandchildren, and now great-grandchild, and plays golf in his spare time. He told Malcolm Wyatt that he’s very proud and happy to have “Raised a wonderful family, my kids are all professionals, and I’ve had a great life here in Detroit.”

Duke Fakir marked six decades as a performed in 2014 and continues to tour with the Four Tops. Most recently the new Four Tops lineup of Spike Bonhart, octogenarian senior citizen Duke Fakir, Roquel Payton, and Ronnie McNeir toured in the U.S. and the U.K.

Sounds like a great idea & book! Unfortunately I don't have any contact information for any of the Four Tops. Best of luck with reaching them. Anita

Hi,
I am a college professor and lifelong fan of the Four Tops. As a child I heard their songs and every time thought, WOW that is the best thing I ever heard. I read your article on Duke Fakir. I wrote a spy novel inspired by their song called "In the Shadow of Love," featuring their song "Standing..." and would like to get a copy to one of them to see, or their agent. If the movie sold, they would make royalties as it could feature their great song.
Do you have any address for their agent or that could get to Mr. Fakir in Palmer Park, MI? I am a very loyal fan.
Tony Santana

Sounds like a great idea & book! Unfortunately I don't have any contact information for any of the Four Tops. Best of luck with reaching them. Anita