This infographic from Ireland’s Bluebird Care gives some potentially preventative tips and insights into Alzheimer’s Disease of interest to seniors, their families, and caregivers – as well as the impacts to healthcare systems and countries that Alzheimer’s patients reside in. 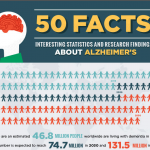